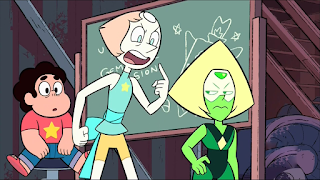 It was a matter of time before we got the robot fight episode.
Once again, continuing the ongoing story arc, we have an episode where Peridot must help the Crystal Gems defeat the Cluster. That's what this episode should have been, but instead it's about Peridot and Pearl arguing over who can do machines better. Don't get me wrong, it's a fun episode, but I kept thinking "why?" All throughout. There's a big threat looming, but the characters stop to settle the Gem equivalent of a dick measuring contest? It's just distracting is my point.

Fun is fun though, and seeing the two Gems using robots to prove superiority is very fun indeed. While the episode makes little reference to it, the barn we see the characters getting their equipment from is from Greg's relatives, making me wonder if Greg even knows what's going on, or if he even cares that they use the material in there. Either way, it's a nice callback to a not so good episode, allowing for us to get to the meat of the story quicker. The big reveal of sorts in the story, being that Pearl is one of many in Homeworld, and Pearls are apparently slaves, this angers Pearl, which kicks off the competition that Steven hosts.

The two mechs (designed very similar to their riders, which is cute) prove to be equals in almost every competition thrown their way, which leads to an unsatisfied Peridot. Despite the Crystal Gems being fine with the tie, Peridot lashes at Pearl, reminding her that she is useless because of what she is (huh, racism exists among Gems, who knew?) which leads into an unexpected final challenge, a fight between bots. It's brief, and Peridot manages to beat Pearl up, which she boasts about proudly. In an unsurprising turn of events though, the Crystal Gems don't care, as they're amazed Pearl could stand up for herself, telling a disappointed Peridot "welcome to Earth". The episode closes with Peridot complimenting Pearl, ready to help defeat the Cluster, which is probably what should've been worked on in this episode, oh well.

As said before, this is a cute episode, and I admire the show for focusing on the story arc, rather than go through multiple useless episodes like last season. That being said, this still felt like a distraction. Maybe if one of the characters remarked upon the fact that they were wasting time on this, I'd be more forgiving, but as is, no one acknowledges this robot fight is taking precious time away. It's fine, but it would've been better if they focused more on constructing the drill.