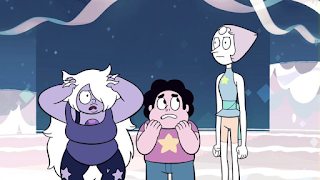 I didn't care for this one, I mean it wasn't awful, but it's not like that's a high bar to reach. Some of you may already be mad that I don't like this, one, at least assuming this is a well beloved, episode, I'm not sure, I'm kind of going in as blind as possible into these. Part of the reason that this one didn't work, is that there was no real charm to the episode, minus the secret group card, nothing here was really funny, or cute to watch, nor was the action any real fun. The other reason this didn't work, was that so much just felt like retreads, we've already seen the Gems retrieve creatures that escaped their bubble, we've seen Pearl and Amethyst argue, even the idea of the Gems having to do this without the help of all the Gems (Garnet in this case) isn't exactly a new thing.

The whole thing starts with Steven and Amethyst messing around, per the norm, as they soon discover that Pearl is holding on to a bubble Rose had made. One thing leads to another, and their confrontation results in Steven accidentally freeing the creatures in the bubble. The three agree on forming a team and recapturing the creatures before Garnet notices. They succeed, but Steven wants to still have a secret team, so he tries to bring the crew together again, which felt like a useless thing to add in, when they could've easily focused more on how they recaptured all the creatures, but oh well. Pearl and Amethyst forcibly break the team up, resulting in Steven deciding to come clean to Garnet about the event, which leads to a predictable fake act, all to bring Amethyst and Pearl together again.

Admittedly the final line of the episode, which is Steven's realization about the Pizza cards, is a funny one, but there wasn't really anything to grab my interest with this one. I really hope the next episode steps up to be better, it doesn't even to be a continuity episode, or a big reveal, just give me something really fun to watch, as for this one, just skip it.