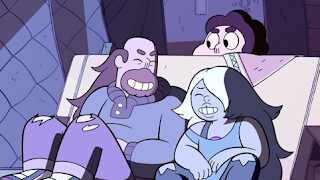 Well, it's always nice to see someone pretend to be your dead mom.

Up to this point, we know so little about the relationship between Greg and the Gems, and while we don't learn much, it is nice to learn something here. Of the bunch, I pegged Amethyst as the one who Greg would likely hang out with, so it's nice to see Amethyst being revealed to have hung out with Greg before, though unexpectedly, we learn how toxic the friendship can be. The funny thing is though, it all starts because they were trying to clean up the storage unit.

Steven and Greg start the episode as they notice how packed Greg's storage is. They decide to clean it, but require an extra hand, in comes Amethyst. Greg starts off uneasy, especially since Amethyst doesn't want to throw anything out. Eventually they both stumble upon copies of "Lil Butler" an odd, but cute 90's style sitcom, resulting in the two watching the tapes, Steven refuses due to being banned from tv for a thousand years. He leaves the two, hoping to continue the next day.

It's New Year's Day, Steven is ready to clean, but Greg and Amethyst are still watching their show, so Steven leaves again. Steven watches the fireworks for the day with Pearl and Garnet, the two revealing the pair can be bad when it comes to hanging out. As their show comes to its end, Greg realizes he's missing the fireworks, Amethyst taunts Greg over this, revealing how she (Rose) was always there until Greg came along,even shape shifting as Rose, thus angering Steven, calling out the two for clinging to the past. Amethyst runs away in shame, but in the next day she and the Gems clean out Greg's storage, while Amethyst gives Greg a fixed framed photo of him and Rose (callback), thus ending the episode on a good note.

This was a pretty good, episode, I'll admit the only thing that truly stood out was seeing Amethyst taunt Greg, but it's still good outside of that. It's nice to explore the relationships of the main cast, but I'd like to see a future episode tackle it more is my takeaway.