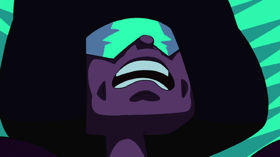 Well this was terrifying.
Again, I really am digging this season a lot more than the last, it's not perfect, but it has been more consistent in quality. This time we step back into the ongoing search for Peridot, who has been a bit of a mad scientist since we last saw her it seems. Peridot isn't the main focus though, Garnet is, as we see her get involved with a pretty horrifying revelation.

I really gotta give props to the animation team for this episode. It's your basic animation that the show has produced so far, but the stuff they do once the episode becomes more horrific in tone, is great and reminiscent of that early episode with the cat fingers, it's creepy to say the least.

The episode starts with the Gems discussing Peridot's possible hideout, while folding Steven's clothes, it's a funny scenario to be sure. Steven, more focused on his clothes, asks Garnet to separate, subtly hinting at the episode's eventual theme. The Gems instead decide to search the Kindergarten for Peridot. Whilst there, the four look around, only for Steven to stumble upon Peridot, who seems to have succeeded at something. Pearl and Amethyst chase her, while Garnet and Steven stay behind to look in the hole Peridot came out of.

What our two heroes find horrifies them, though Garnet more so. We see dismembered limbs, fused together, as the animation is almost reminiscent of classic horror sequences from the old Disney films. Garnet freaks out, acknowledging these are destroyed Crystal Gems, forced together, which as she later mentions, is wrong, no one should be forced together like that. In any case, Steven manages to bring sense to her, before she separates, so she could stop all the fused Gems. After Pearl and Amethyst arrive to help, they admit Peridot got away, which leaves Garnet's focus on the forced fusions. The episode concludes with Steven and Garnet talking about fusion, which is a nice way to close.

This was an awesome episode, not the most terrifying of the show, but it's up there. It's a great episode, that builds a lot of great atmosphere before we get to the centerpiece of it all. This is one episode, I'm truly grateful to have, and I must once again say, I am impressed with how good this season has been so far.