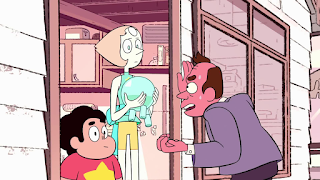 I feel like this episode is exactly what I've wanted from some earlier episodes, it's funny, has a good story, but most importantly it connects to the last major episode. The episode starts very mellow, and even as we tour around town, it stays that way, but once we see the Crystal Gems, it becomes clear that there's a lot of dread in the coming invasion. It's not exactly horrifying, but knowing the Gems are completely afraid makes the whole thing stand out.

Continuing from the last episode, Pearl has created a device that she claims will stop any alien devices. The experiment fails as the town instead faces a black out, after the device creates an EMP attack, oddly though some devices still work, so I guess it was limited to plugged in equipment. Anyway, the Mayor of Beach City confronts Steven, hilariously assuming the Gems are his sisters (the tall one, the short purple one and the attractive one), he demands they fix the issue, but Pearl (the "attractive one") assures him the power will be back on by night, or never. The Mayor decides to calm the town, with Steven to assist by handing out pins and glow sticks for the Mayor.

Everyone in town is assured the power will be back on by night, which leads Steven to question the Mayor, considering he doesn't know for sure. As he returns home, Steven hears the Gems worry about Peridot, but they refuse to say anything to him, instead acting like they have everything under control. The town attacks the Mayor once night time comes, leading to Steven standing up for him, telling everyone the Mayor is just scared and doesn't know what to say because he cares for the people (side note, Ronaldo's dad not sure if Ronaldo could handle the dark is hilarious and got me laughing hard). Steven returns home, understanding why the Gems are keep things secret from him, but decides he wants to know what they feel about Peridot, the Gems reveal their fear over an advanced race of Gems. The light comes back on, bring some calm, but uncertain feelings about what's coming.

I really liked this episode, especially that it leaves out any kind of hope. These characters are unsure of the coming attack, which makes sense, they haven't dealt with any Gems for centuries, so it makes sense, seeing some newer, mire advanced Gems would scare them, what can they do after all? It's a solid way to prepare us for the season finale, which I am more than ready for.