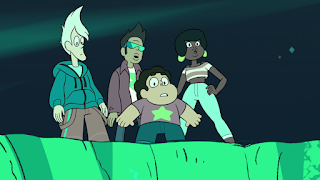 Well it's definitely better than the last time Steven hung out with the cool teens.

Well, it looks like season two may be an improvement after all, no the episode isn't great but it's cute. One thing that makes this feel better, is that this episode, while a laid back episode at its core, still acknowledges the events from before. I like that Peridot's escape pod, Steven's realization of the alien nature in him, as well as Steven's realization of how he's connected to his mother, all factor into an episode about relaxing from such troubles. Just adding those tidbits lessen the feel of this being filler.

On to the plot, this episode begins with the Gems cleaning the debris from the Homeworld ship. Steven happily helps, until the cool teens show up, they wish for Steven to join them in their fun, as he brings the optimism they need for balance. Steven joins, the four go on a late drive, discussing their own issues, with Steven proving to be the most troubled, despite his positive worldview. This all ends as the four discover a glowing object in the crops, Peridot's escape pod.

Thankfully for the four, Peridot seems to have abandoned the area. After hopping in, Steven realizes he has control of the ship, he wants to bring it to the Gems, but the teens convince him to stay and mess around. Eventually, after much horseplay, the pod starts becoming destructive, with Steven stuck inside, trying to stop it. The Gems arrive, believing it to be Peridot, they attack with full force, luckily though, the teens stop them after convincing them that Steven is inside. Ready for a scolding, the teens once again rescue Steven, by reminding the Gems that he's still just a human child, he's in need of some fun every now and then. Thus our episode ends with Steven allowed to finally watch tv again, cute.

There's charm to this episode, especially in seeing the cool teens still effectively be human, rather than caricatures. The biggest plus though, is knowing that the previous events are still affecting Steven, making for some interesting questions. I'm hoping this season keeps that up, but for now, we seem to be on the right track.