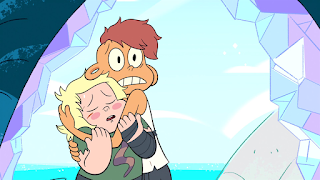 Well, it's an okay episode at least. I've got nothing against shows doing laidback episodes, but I'd still prefer that they at least try to be entertaining while doing so. This episode isn't exactly hilarious, or incredibly emotional, but it has another nice look into the friendship of Sadie and Lars, emphasis on ship. The Gems barely factor into this one, which is weird there's not much of them after the opening minutes, but oh well.

Anyway, the episode begins with Steven, warping the Gems back home after they fail to find a creature on a mysterious island. The Gems go off on their own mission afterwards, leading to Steven showing off his new warp powers to Sadie and Lars. They all travel back to the mysterious island, but soon find themselves trapped. Lars hates being trapped, Steven seems to just want to wait for the Gems to realize he's gone, while, Sadie, seems oddly comfortable. Time goes on and we see Sadie and Lars getting closer, as Steven sings a pretty forgettable tune. Eventually, an invisible Gem monster attacks the three, leading to Sadie, revealing she hid the warp pad, all just to relax with Lars. The revelation, leads to an argument between the two, despite Steven just trying to get out, which then leads the monster to confront Sadie and Lars. Sadie kills the monster, as the three decide to leave the island behind.

Again, it's all okay. I have to wonder why the Gems never noticed Steven was gone, as the episode makes it seem as if they've been stuck there for a few days. Then there's the weird face the creatures on the island have, we never get an answer which just makes the whole thing creepier, but also feel useless to the story. In any case, everything comes together fine, so at the very least, it's not an annoying episode to watch.