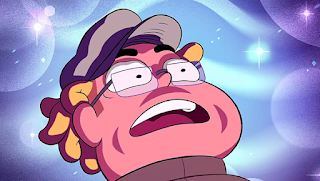 Sneeple eh? Well I hope I don't meet a snerson.

I liked it! It feels like forever since I've said that about this show, but I'm glad we got another good episode. Ronaldo has rarely been seen up to this point, so it's nice to see him have a full episode, dedicated to his previously mentioned search for the weird. I also get the feeling this episode may be teasing future episodes, but that's just my guess, on the whole I just enjoyed this episode.

The episode begins with a game of Steven tag, a game in which Steven tags the Gems, which they then have to turn into Steven. Pearl pretty much has none of it, but Garnet and Amethyst play along, which was a pretty funny sight to see for this show. After the game, Steven meets up with Ronaldo, who claims to be researching the strange things he finds in Beach City, Steven tags along, befriending the conspiracy nut.

After a full day with him, Steven rushes to the Gems, asking if they know anything about the snake people, or sneeple, Ronaldo claims to be involved with all the bad things that happen in Beach City. Pearl and Amethyst quickly shoot this down, confirming that all those strange sightings were caused by them. Funny enough, the two also explain humans have a history of trying to make sense of things in the weirdest ways possible, just so they can pin all their problems on a single entity, which is honestly hilarious to me. Steven reveals this info to Ronaldo, who pretty much breaks down over the revelation.

Feeling bad, Steven decides to confirm sneeple to Ronaldo, by dressing up as one, this backfires when Steven realizes how nuts Ronaldo is. Ronaldo, along with his younger brother, Peedee, hold Steven hostage, in a humorously horrifying way, which results in the Gems rescuing Steven. Ronaldo, hilariously is no match for the Gems, but he tries to fight anyway. Eventually Steven reveals the truth, but Peedee, finds some new info to get his brother to make new conspiracies, which, again, feel very much like foreshadow.

This is a funny episode, that fully utilizes it's cast, which makes all the difference when it comes to episodes being good or bad.