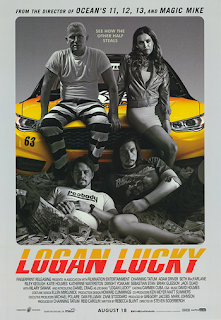 Well this certainly was a neat surprise.


I can't imagine anyone saw this coming, but Logan Lucky, is certainly one of the better movies to be released this year. A heist film, reminiscent of classic films, this is sure to end up in many "best of the year" lists, as it likely will end up in mine. I'm not sure, if we'll see this rack up a lot of awards come that season, but I hope there's at least some acknowledgement. That the studio behind this couldn't promote it better, really shows how broken the system is, as I imagine this is a movie that could've easily become a huge hit with the right type of marketing, as it stands, this will likely get a huge following over time.

The movie takes place in rural America, which, let's face it, isn't exactly the most popular place right now. Channing Tatum, plays a recently fired man, who just wants to see his daughter, who lives with his ex-wife. Adam Driver plays Tatum's one armed brother, while Riley Keough plays their sister. Rounding out the heist team, is Daniel Craig in a scene stealing role, as a southern convict, he's hilarious and I hope he gets some awards recognition in what has got to be his best performance to date. Also along for the ride, are Craig's brothers, together they plan to rob NASCAR, through the use of a hole in Tatum's former job, seeing the plan play out is definitely one of the more fun stretches of film this year. Even when the film starts to go beyond the heist, the writing more than justifies it. It's simply amazing just how well it works, even when most movies would've probably ended on an earlier note, I've heard this is the result of a possible sequel being in the talks, but I hope that's not the case, this seems perfect the way it is.

There's perhaps some who will be reluctant to watching a film filled with "country bumpkins", but I assure you, the film's biggest strength is turning these characters into real people. They're not caricatures of racist/sexist morons, nor are they some kind of "perfect, real, American", these characters are humans, they live, they struggle, and they are not some extreme example of what people believe to be southern, they're just people. It's utterly charming to see actual people dominate a film like this, it's that element that I feel works the most on this film, if it were just a heist movie, it would probably be average, but that it emphasizes on the cast becomes a real strength.

As mentioned before, this movie did not receive a lot of marketing, so it's probably gonna be a while before most people see this. After watching it myself, that's a shame, so I'd suggest you watch it asap, before everyone else discovers it, you're gonna wanna be ahead of the curve on this one. Logan Lucky is a fantastic film, and as one of the last of this summer, I can safely say it's one of the highlights, watch it now.
Support me on Patreon