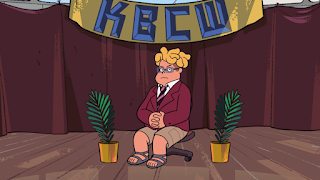 #KeepBeachCityWeird
Ronaldo is one of those characters that's fun to watch, but I can't imagine him working in large doses. That's not saying I don't like the episodes where he's a major player, after all I really liked this episode, but I can picture the mileage on his humor dropping fast if he were to appear more consistently.

That all being said, this is another fun episode to relax with. This time, Ronaldo is doing a documentary about the Crystal Gems bringing everything weird to Beach City, more specifically the recent Gem invasion. It's a cute documentary style episode, that provides most of the humor with the flubs in doing this kind of film, while also showcasing most of the town not really caring about what the Gems do.

Eventually, Ronaldo's quest for the truth leads him to demand the Crystal Gems leave to keep everyone safe, blaming them for everything that goes wrong. It's funny enough that the writers chose to tackle the concept of the heroes being the cause of the problem with this episode, but it's funnier that no one seems to care so long as they're safe, or in the case of Ronaldo, so long as things are weird. Yep, that ends up being the solution of the episode, Ronaldo realizes a life without Gems is a normal life, which he dislikes, so he begs for them to stay. As the episode ends, we see the Gems watch the video and acknowledging it's poorly made.

Side note, bit of a nitpick, and admittedly Garnet even says it's poorly edited which adds to the joke, but I will admit the editing did annoy me a little. Don't get me wrong amateur editors will mess up, but so many poor edits (cutting too late for example) are easily avoidable even for those new to this stuff, which is why it's always annoying for me to see shows do these "mistakes".

Anyway, yes the episode is a blast to watch, especially if you've seen prior episodes, so it's definitely worth a recommendation. Now let's get back to the Homeworld Gems, please?