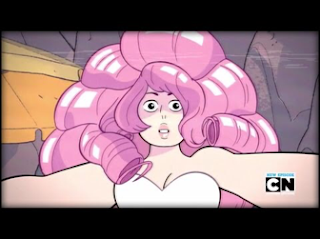 "You're going to be a human being."

This episode starts pretty average, but it's all a trap, yep, you better believe you're eyes will be wet by the end. It's another Lion focused episode, which means we get more hints to his connection with Rose, which of course reveals more information to Steven. That this ends with the show's most emotional scene yet shouldn't be a surprise, but it's definitely touching and I can see why this episode got the acclaim it did, so let's dig in.

The episode begins with Steven and Lion at the Doughnut shop. Lars, typically, leaves Sadie with all the work as the shop closes, which leads to Steven finding the lunch bags Sadie's mom makes for her,  hinting at what this episode's theme will be. Steven prepares for sleep, but Lion can't seem to just sleep, to the point that he smothers Steven in his sleep, specifically with his mane. Rose rescues Steven, (while creepily/funny enough, revealing she watches Steven sleep) but Lion keeps trying to get Steven in his fur. Steven eventually realizes that Lion's mane is a gateway to another universe, one hiding trinkets and a bubble (future Gem enemy?) , but Steven just grabs on to the cassette within.

Eager to find out what's within, Steven takes the tape to the Doughnut shop, using the player within. He begins to watch it with Sadie, they both assume Rose to be within the footage. At first, only a voice is heard (Susan Egan, voice of Megara from Hercules for all you dorks), then we see a slightly younger Greg, it's a bunch of cute bits with him. Then, the full reveal, Rose Quartz, definitely a stand out moment for fans. Rose gives Steven a message, it's a beautiful one that leaves the two viewers in tears,  Lars is confused by this, seeing Steven go home, full of love, as Sadie calls her mom, just to let her know she can make her lunch whenever she wants (earlier, Sadie revealed she kept telling her mom to stop making lunch, cause she was too old for that). It's a beautiful ending, that needs to be seen, fan or not.

The episode is pretty weak admittedly, but the build up to that amazing ending is what makes this worth your time. Sure, you'll probably end up just replaying the final moments, but you can't deny it's a powerful scene that more than makes up any shortcomings the episode has. I hope the show can keep surprising me like that, it'll make this run through something special.