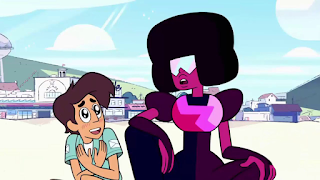 Garnet thinks three's a crowd. Joke.
Once again we are treated with a laid back episode for the show, this time dealing with Garnet getting an admirer. I like that the show now seems to want some focus on the Homeworld Gems, allowing for a story arc to grow in the more relaxing episodes. It's not a perfect way to build a story, but I like the attempt here.

The episode begins with the return of Jamie, a mailman I honestly don't remember, but Steven does, so oh well. Jamie is delivering all the mail, as Garnet returns from looking for Lapis and Jasper, Jamie falls in love instantly. The following day, Jamie writes a love letter for Garnet, Garnet, obviously denies the love as she is already a relationship (Ruby and Sapphire if you remember), resulting in Connie writing a response letter for her.

As Steven and Connie prepare to hand Jamie the response, but as they realize how fragile he might be, they instead decide to rewrite the letter in a kinder tone. This backfires, as Jamie thinks he still has a shot with Garnet, resulting in him calling for Garnet late at night, at which point Garnet completely breaks his heart. The next day, Jamie is too heartbroken to do much, resulting in Garnet lifting his spirits, by telling him that he's a great actor, ending our episode on a humorous note as Jamie realizes he should do his job.

It's a cute episode, not memorable but it has charm in it. I like that the episode has Garnet busy with looking for Lapis and Jasper,  as it makes it feel like it's part of something bigger, even if this episode likely won't factor into the eventual reappearance of those characters. It's a fun episode about love, which is all it needs to be.