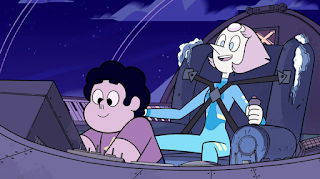 Steven is a future hoarder isn't he?

We have another laid back episode, one that is mostly forgettable, despite some charm and heart within. I hope this isn't a continued trend here, as I'd really hoped episodes 25 and 26 were an actual turning point for the show. I'm not asking every episode be this important twist kind of story, but these laid back episodes have so far been forgettable, with few exceptions of course. This one's not bad, but I'm not gonna think about it much after this.

We begin this episode with the Gems inspecting some broken warp pads. Steven questions what they're for, with the answer being that they lead to other worlds with Gems, this saddens Pearl as she remembers the days where she could see those other worlds. We don't get much knowledge of those Gem worlds this time, which is a bit disappointing, but our main plot has some charm.

Steven wants to see space, so he goes to Greg. Greg, reveals to Steven that they have some former aviator family members, leading to the two making some cheap planes out of the material found in their storage. Pearl catches wind of this, so she decides to help them make a ship, which starts out good, but she instantly starts to worry Greg. Defying orders to stay grounded, Pearl takes Steven with her, trying, and ultimately failing to go to space. There's a bit of emotion in seeing Pearl cry over losing a chance to see the other worlds, but Steven cheers up, which is a cute way to close this episode.

There's denying there's charm to this episode, hell, if the focus was on Pearl throughout the whole episode it could have been stronger. As is, it's forgettable and a reminder that this show needs to work on improving a lot of the laid back episodes.