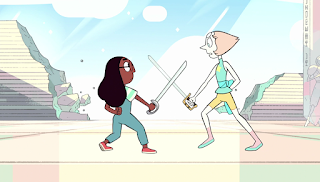 Stop! Or Pearl will stab!
Much like the last episode, this one doesn't bring up much about the search for the other Gems, unlike  the last episode, this one actually holds a bit more significance. It's another episode hinting at how Pearl felt about Rose, while also having Connie grow as both a character and ally. It's not incredibly exciting, as the Pearl stuff just feels like a smaller serving of what we saw among the final episodes of the last season, but I dug it all the same. I guess what really won me over here, is just seeing how crazy Pearl eventually gets in trying to make Connie into her equivalent for Steven.

The episode begins with Steven and Connie hanging out, as Steven acknowledges that Connie could make a great sword fighter. Naturally, the two go to Pearl to teach Connie how to fight, Pearl is reluctant at first, but she quickly agrees upon realizing that Connie wants to do it for Steven. Training begins, leading to an incredibly sweet song that alludes to Pearl's obvious affection for Rose.

As the training progresses, Steven begins to get incredibly irritated, feeling as if he's being left out. Steven's worries reaches his tipping point when Pearl convinces Connie that she is nothing, just someone to protect Steven, Garnet of course explains the issue to Steven, who decides to jump into Connie's training. Reluctant to accept his help at first, Connie repeats what Pearl has taught her, but Steven convinces her that his help is just as valuable, resulting in the two angering Pearl. Defeated, Pearl shouts at Connie, telling her she needs to protect Rose, resulting in her slinking off, with Connie and Steven to comfort her as the episode ends.

This is a rather sweet episode, with some nice growth. I don't know how valuable Connie will be as a fighter in the future, but I do like seeing the show create new allies for the Gems. Cute episode, with a nice arc to it, I find myself with another charming episode here.