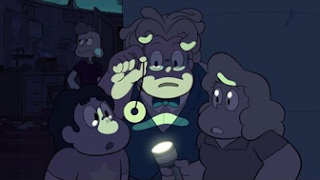 Well that was short.

Once again we have an okay episode, after a pretty big event, fine, at least this one's fun. I really wish this show would focus on the plot at hand sometimes, don't get me wrong, I like getting breather episodes every now and then, sometimes they even provide good character development, but sometimes they just feel like filler. This just feels like filler, maybe it isn't, but the episode cuts out right when we learn any kind of valuable character information, making it feel short, and pointless.

The episode begins with Steven inviting Lars to a horror movie club, hosted by Ronaldo, Lars declines, until Sadie reveals she wants to go. Ronaldo also seems bothered to see Lars, hinting at the eventual conclusion, but now's not the time for that, so let's see them watch a classic horror film. There's some humor here, as Ronaldo and Sadie connect, while Lars is the odd man out, but it's Steven who gets the funniest bit when we see how scared he is of the film, hint, he gladly sits with a couch blocking his view.

Things get crazy though, as the whole place is revealed to be haunted. The four try to escape, while Lars argues with Ronaldo, eventually resulting in Sadie being taken by whatever is haunting the place. Ronaldo tries sacrificing Lars to rescue Sadie, but eventually Steven finds the cause for everything, a possessed diamond that hates Lars for hurting the building before. It reveals that Lars and Ronaldo were once partners in searching for weird things, but Lars, after carving his name, leading to the building hating him, was embarrassed to admit he hanged around Ronaldo. The episode ends with Sadie and Steven leaving the two to discuss their issues, Lars tries to leave, but Ronaldo references a quote Lars said in their youth, it's not exactly a good way to end.

Overall, this is a fun episode to watch, as the build up to the horror is well done. My issue is that it really deserved a better ending, which probably didn't happen due to the length, which is disappointing. If you need a spooky episode in October, this is a decent one, otherwise skip it.