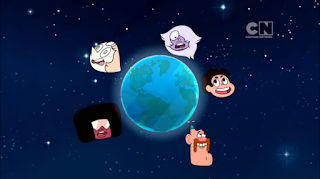 BEST.EPISODE.EVER!
I like Uncle Grandpa, a statement I'm sure will get me killed, but I truly do. Admittedly I haven't watched much of that show, but what I have seen was always fun, creative, as well as a visual treat, it's surreal that's meant to be a gag, which I often find funny, so yes, this crossover was a welcome treat the first time I saw it, and still is really.

It's a pretty basic episode, in terms of plotting anyway, so I won't delve into the plot much. Suffice to say, this episode is a non-canon (Uncle Grandpa confirms this) episode about Steven, trying to learn how to control his powers with the help of the reality breaking Uncle Grandpa. The Gems fear Uncle Grandpa, so they chase him as Steven tries to keep him safe, along the way we get jokes, fourth wall breaks, and Uncle Grandpa pushing the animated limits of the show to his insanity.

What can I say, this is a spectacularly fun episode. Pearl gets a lot of insane expressions, which are always great to watch. Uncle Grandpa's friends also get their moments to shine, a particular favorite being Pizza Steve, who does not like the idea of another Steve... n being around.

The episode's greatest strength though, is just seeing how insane this crossover ends up being. Without a doubt, this was a weird pairing, one that the creators clearly enjoyed working on, so much so that the episode manages to feel natural, respectful to both shows and becomes one of the best crossovers I've seen. Definitely watch this, even if you're not a fan of either show.