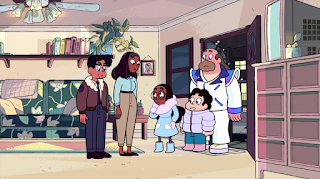 This episode was cute, and for me, very reminiscent of the pilot (I'll review that if there's a demand). It's another episode dealing with time, though this time in the form of deja vu. It's also another Connie and Steven episode, which always has a charm to it that is romantic, yet innocent, a combination that's hard to find these days, so it always feels a little refreshing. The most exciting thing is a little hint we get to the story that's being built up, it's not much, but it really helps in building hype. Anyway, on to the plot.

Connie and Steven are hanging out, when Connie's mom calls, telling her that she needs to get home before the blizzard hits, or else her dad will pick her up. Connie fears being driven by her dad, so she decides to go home, but Steven tries to convince her to stay, while the Gems, decide Connie should get home, while Garnet gives a small kiss to Steven, hoping he does the responsible thing. The kid's head out to Greg, hoping he can drive Connie home, but Steven decides to mess with his dad by getting him to dress in a way that's "cool" for Connie's parents. After a cute montage, Greg is "cool" enough to drive, but the snow picks up, resulting in the van crashing, so the three hike to Connie's home. With her parents angered, they reluctantly let Greg and Steven stay over, but Steven notices a weird hypnotic stripe on Greg's "cool" suit.

Steven finds himself back in the crash, he convinces everyone to stay in the van. Everything works out fine, until Connie gets a call from her dad, who is driving in the snow, she worries as she knows he's bad at driving through the snow. Connie's dad finds the van, only to crash into it, resulting in Steven going back in time, this time before Greg drives the two, Steven tries to rush home with Connie, only to find the Gems in a circle trying to prevent an attack from the Homeworld Gems, their arrival shocks Pearl, resulting in their plan being ruined. Once again Steven is in the past with Garnet kissing him, revealing she passed her future vision along, for Steven to make the right choice. Steven rushes with Connie, getting his father to drive the two before the snow picks up. The episode ends with the destination, as the Universes are happily asked to stay as the blizzard goes on. Steven and Connie see the snow at night, together.

This isn't a great episode, but it's cute and harmless. I smiled from beginning to end, which makes this one I'll definitely revisit at some point.