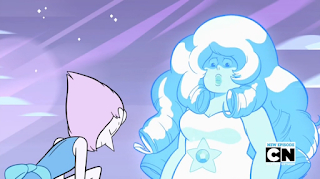 I really liked this episode, but I wish it didn't follow the last one.

Is this a solid episode? Absolutely, it's emotional, gives us a new depth to Pearl, while also finally giving us the (obvious) answer that Lion was connected to Rose. The issue for me, is that once again this feels like it's distracting from the story. I'm not saying it had to continue from the last episode directly, but just something to tie it together would help. As is, there's so little to actually establish that this takes place after the last episode, at least a mention that they're gathering items to prepare against Peridot would make this feel less like a distraction. That it doesn't feel like the show cares about the story it's building up, is why I keep bringing this up, I want to love this show, but I can't if the show keeps jumping away from the stuff that feels big.

Alright, enough of the rant, I'm sure you want to know what this episode is about. Steven, while looking through an old battlefield, finds a scabbard, that Pearl reveals was his mother's scabbard. Curious about the whereabouts of the sword (it's obvious if you've seen the show up to this point), Steven asks Pearl if she knows, proud of the moment, Pearl reveals to Steven that she's the only Gem who knew all of Rose's secrets. Pearl takes Steven to a weapon vault, which Steven quickly reveals that he's been there before (the episode with Lion and the theatre), which leads to a frustrated Pearl, as she realizes Steven hardly needs her to explain to him anything that works there. To make things easier, Pearl reveals the design of the sword his mother had, Steven realizes that Lion has it.

Back at home, Pearl is surprised to learn that Lion is connected to Rose, as he seems to carry a lot of Rose's equipment. Things take a very sad turn, once Pearl realizes she didn't know as much as she thought about Rose, she runs off as Steven and Lion follow. The pair eventually reach Pearl, crying, desiring to be alone, not sure if Steven even has Rose in him. Steven decides to get to her, wanting to comfort her. Pearl even projects a memory of Rose, it's never flat out said, but we already know how she felt about Rose, it's touching and tragic. The episode concludes with Steven cheering up the sad Pearl, giving her Rose's old flag as they go home.

It's a really good episode, I just can't deny that, no matter how annoyed I feel by it. It's just unfortunate that this episode has to feel like a distraction from the ongoing story arc, it shouldn't, but the lack of acknowledgement of the coming danger just sticks. I know I'm alone on my issues for the show, so if you don't mind I get it, but for me, despite the recommendation, this show really needs to set itself some priorities.