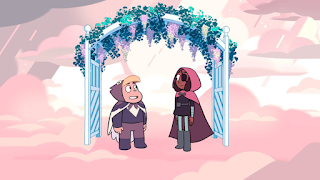 I hate it when shows air things out of order.

I was ready to review a later episode, because as it turns out, Cartoon Network aired the episodes that actually deal with the season finale arc, together, making this all the more disappointing. No the episode isn't awful, but it's pretty forgettable and just distracts from the more interesting plot.

I'm not sure if my lack of interest for this episode stems from my lack of understanding a bunch of Y.A. Novels, but if that is the case, than that's partially my fault oh well. In any case, the episode begins with Steven finishing Connie's favorite book series, as he does so, Connie starts to rant on the finale, feeling like the marriage story took up most of the plot (Twilight parody?). Deciding he wants to help Connie live out her idea, Steven takes Connie to Rose's room, he explains it can do whatever he wants, but just to avoid overloading the room. Connie asks for a costume shop, so she can dress as the lead, which she does so quickly, leading to the two adventuring.

At first Steven sees nothing wrong, but gets frustrated that Connie keeps making him think of ideas, rather than provide her own. The annoyance of constantly asking for his input, leads to Steven telling Connie that she needs to make her own ideas, resulting in the obvious twist, this isn't the real Connie, she was left at the shop. The fake Connie attacks Steven, trying to get him to tell truth to Connie, which, again, obviously turns out to be that he actually enjoyed the last book. As the fake disappears, Connie admits she is fine with Steven liking the last book, he's much more important than a book after all. We close the episode with Steven explaining his interpretations of certain events of the series, as Connie, joyfully listens.

As mentioned before this isn't an awful episode, but I just didn't care for any of it. Much as I hate seeing episodes out of order, I think Cartoon Network made the right call jumping to the more vital episodes. Skip this one, there's really no reason you have to watch it.