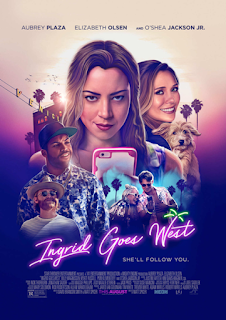 While it'd be easy to say this is depressing movie, the truth is Ingrid Goes West is a deeply unsettling movie, the kind that gets more cringe-inducing the longer you're there for the ride. It's a commentary on how we live in the age of the social media, that aims it's critique purely on the person, not the machine. It's that choice that makes this work, sure, understanding the concept of instagram is a key component, but at the end of the day, the problem is less about that, the real issue is how we deal with our own stress.

Our plot here, is about Ingrid (played by Aubrey Plaza), a woman dealing with the death of her mother. After she crashes the wedding of one of the people she followed, as well as after serving some time in an asylum, Ingrid decides to reinvent herself by going to L.A. to become friends with an instagram celebrity, Taylor, played by Elizabeth Olsen. Creating a healthy facade, with the help of her new landlord/aspiring Batman screenwriter, Dan, played by O'Shea Jackson Jr. Ingrid, tries to successfully live with lie built upon lie.

To go any further would be saying too much, but I think you can get the idea with that summary. Ingrid is a damaged soul, but the movie is about seeing her try to convince herself that everything will get better, despite the obvious coming, the truth inevitably crashing down on her. Just seeing everything play out, even as we're given plenty of jokes is kind of heartbreaking to witness, we know there's something wrong with Ingrid, but we also know she's not really sure how to deal with that. It's that humanization that keeps us from rooting for her, but also keeps us from hating her, she's unwell, and there's not much anyone can do for her sadly. My initial thoughts as the movie played, were about how much this is like an episode of BoJack Horseman, if you sucked the absurdist stuff out and doubled down on seeing the self pity despair. It works, because much like our lead, we don't know how to deal with what we see, we just know that no one should live in a such a depressing manner.

The movie is able to succeed upon it's performances alone. Olsen gives a great turn, as Ingrid's favorite person, a shallow instagram star, who fronts an innocent, down-to-Earth persona, all to keep fame online. O'Shea, in his second performance apparently (between this and Straight Outta Compton, this guy is definitely the real deal), also shines, as perhaps the film's only good person, he's Ingrid's landlord, who has also dealt with family issues, allowing him to connect with Ingrid in a more personal level. The weak link in the whole thing ends up being Taylor's boyfriend, played by Wyatt Russel, who isn't awful, but there's not a whole lot to him, at least not until the end of act 2, but even then, he's still just there to back Olsen up. But of course, Aubrey Plaza is our lead, and she does a fantastic job at it. I hope Plaza gets some nominations by the time we reach awards season.

I'm not sure if I can fully recommend this to a lot of people, not because there are faults with the film, but largely because it is great at making us uncomfortable, which is the point. We're not seeing the glamorous life of an Instagram fan, we're given an honest portrait about a cry for help that keeps sinking further into the abyss. Social media isn't at fault, despite amplifying this kind of life, in the end we're the problem, how we deal with stress is the problem, not the device we use to make our life sound glamorous,

It's a great film, one that makes me too depressed to watch right away, but good enough to tell you to watch it, trust me you will relate to some degree.