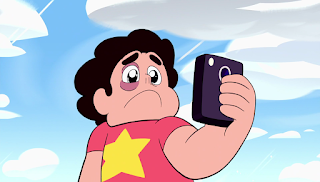 Pick up your calls Steven!

Back to the reviews, aren't you glad? I'll admit I had my issues with season one, but I sincerely hope after that break, along with this new season, that I will grow to love this show. That all being said, this is a fine start to the season, but not one I love. It's okay, at least the season starts in a proper way, acknowledging the events of the last episode.

We pick up exactly where we left off last time, after Lapis brought down Jasper with her. Steven picks up his phone to speak with Connie as the Crystal Gems all react to what they've witnessed. At first, Steven, along with Amethyst respond with joy, then Greg shows up. As Steven explains the situation to Greg, Greg becomes terrified, fearing the possible loss of Steven, it's a funny enough scene that serves to drive the episode's plot, Steven refusing to let Connie into his life, fearing he might scar her as well.

It's a cute enough plot, as well as something I'm not sure many kid shows address. Steven's avoidance of answering the phone leads to a cute song, while also a misinformed epiphany, but this all crashes once Connie tries confronting Steven. Of course the two come together again as friends, with Greg arriving in a better mood to further relax Steven, ending the episode on a sweet note.

This is by no means an impressive episode, it does its job, and that's it. I did like the idea of doing an episode on acceptance of the danger ahead, but I don't know if this was the most satisfying way to do such an episode. Still it's a good start and I hope this season gets better, while handling story arcs in better ways.