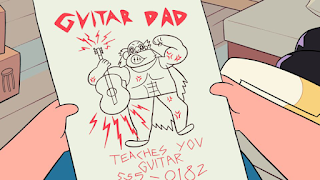 This is a cute episode, nothing more, nothing less. It's not an incredible tale of sons and their fathers, but it's one I can imagine being a joy to sit through for some fathers. Once more, it does feel like a useless distraction, but it's at least a more absurd, fun episode to watch than some other episodes that just sidetrack from the impending doom of the season finale.

Steven creates some crudely drawn flyers for his father, they're for his guitar lessons, which admittedly, would be a great way for him to make money, I mean, screw-up or not, the dude can definitely play the guitar well from what we've seen in the show. The Gems themselves rest on the couch, not impressed by Steven's work, (odd how they just sit there the whole episode) but he decides to post them regardless. The drawing catches the eye of Buck, one of the cool kids, as well as the son of the Mayor. He wants to see Steven's drawing be turned into a shirt, Steven agrees thinking it'll help his father. The two make the shirts, but rather than give them away, Buck decides they should shoot the shirts from a shirt cannon at people, it's as hilarious as you might imagine.

The shirts attract attention for Greg, but no one actually wants the lessons, they just want pictures of "Guitar Dad", not that Greg minds anyway. Steven however, realizes the shirts are mocking his art, which leads to him trying to shut them down, first by getting the Gems (hilariously, they do not care, thus do not leave the couch) but then by taking matters into his own hands. As Buck's father, the Mayor,  gives a speech, Steven appears on a rooftop with the shirt cannon, almost as if he's ready to snipe some people (yes, the scene is one of the funniest moments of the show, very reminiscent of some darker films). The shirts he shoots out are revealed to be some of of Buck with his father, it's cute, leading to a peaceful resolution with Buck apologizing to Steven, while asking Greg for some lessons.

This is a cute episode, it's not one I highly recommend, aside from that Steven sniping bit anyway, but I enjoyed it. Please though, let's continue the more epic story of Peridot coming to Earth, please.