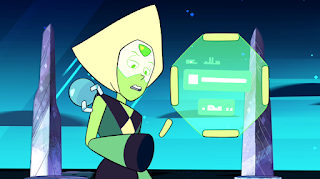 It's another twist for the show, hooray.

Well that was an expected ending, but I can't say it wasn't pleasing. The whole episode is clearly meant to build up a big story, but I can't deny the payoff here being exciting. I'm not sure if we'll see a more rebellious Steven going forward, but this episode sets up the possibility, which would be interesting to see while he's growing up.

Much like episodes before this, we see the Gems on an adventure, Steven is shown suffering from pollen allergies, resulting in him sneezing as they warp home. Steven notices something in another warp portal, leading to the Gems thinking he's just seeing things. This freaks the already sick Steven out, which leads to him having a lack of sleep as he believes whatever he saw might attack them. The Gems try to prove Steven wrong by showing him the various warp pads (nice callbacks). Eventually Pearl, proudly states Steven saw nothing, but Steven remains sure he did, resulting in the two arguing, before Garnet breaks it up.

Steven continues to guard the warp pad, which Amethyst mocks him for. Just as everyone disappears, Steven finds a tiny bot trying to use the warp pad. The two are transported, Steven tries fighting it, but eventually finds himself outside the warp beam with the bot. The Gems rescue him, with Garnet admitting her error. They find themselves transported to the area with the broken pads from a few episodes ago, there's a lot of the same tiny bots gathering, fixing a warp pad to what they call homeworld. They're all frightened by what will come through, which is revealed to be a new Gem, her name is Peridot, she seems entirely tech based. All the Gems, minus Steven are frightened, meanwhile Peridot finds out that someone has been in the area, once a sticker left behind by Steven is found, she leaves quickly. The four Gems go to the now repaired warp pad, only for Garnet to destroy it, as Pearl worries that THEY are coming back.

This is a solid episode, that has a much better build up to the surprise reveal than the last time we met a new Gem. There's certainly a lot of dread by the end, as the Gems realize there's someone else out there operating the warp pads. What hit the hardest though, was seeing Steven and Pearl argue, whether or not we'll see more of that soon is what I'm most curious about, either way I'm interested in seeing more.