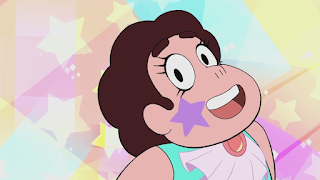 I've seen this before.
By no means an awful episode, this is still one I would rather skip honestly. It's the age old story of a mother, forcing her daughter to do things because she wants to see her be great, with the twist being that the mother does let her daughter do what she wants, she just goes over the top in supporting her. It's not the most unoriginal episode of the show, but I just couldn't care what happened throughout the episode.

Steven, is out and about spreading the word about an upcoming performance, he soon stumbles upon Sadie singing. Proud of her skills, Steven insists that she join the show, Sadie is reluctant, but eventually agrees. As they practice, Steven eventually meets Sadie's mother, who quickly supports Sadie's decision to sing, while going all in on helping her practice.

The big night comes, as we see a few shows, Sadie's is promised as a secret performance. Steven and Sadie's mom prepare her for the show, putting on makeup, glitter and all of that on Sadie, as she clearly looks uncomfortable. The night goes on and eventually she gets fed up with both Steven and her mom, admitting she didn't want to do this, and how she feels about every time her mother forces her to do things she expresses interest in. With her feelings admitted, the show still needs someone in her place, thus Steven puts on her dress, singing in her place.

It's not bad, but it's also just empty for me. It doesn't help, that this episode also has no connection to the season's story arcs, making for an episode that can easily be skipped with little consequence. I've heard people adore Steven singing in the end, which is fine, but for me it's just nothing all that entertaining, sorry.