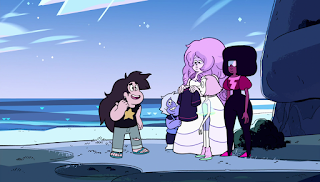 Well that was a meet-cute.

Once again, we have another episode that doesn't deal with the ongoing arc, but to it's credit, it's at least a cute episode that gives us insight into the relationship between Steven's parents. If there's any major criticism I have here, it's that the episode is too short, I definitely feel that this would benefit if it were allowed more time to tell the story, sure, later episodes might delve deeper, but even the story being told in this episode feels short for what it's trying to say.

The episode begins with Greg, revealing the story of his original agent to Steven. We see a younger Greg, who looks an awful lot like an 80's teen version of Steven, he's holding a concert, with only one person listening, Rose. After the concert, Rose and Greg share a short conversation, while Greg tries to give her a free shirt, his manager though, hates the idea of giving free things. Greg sneaks off to find Rose, stumbling upon Amethyst, Pearl, and eventually Garnet, he demands to see Rose, who eventually shows herself, he gives her the free shirt. From there, we get Greg, arguing with his agent, wanting to stay behind for Rose, the agent disagrees, Greg leaves him, and meets with Rose, telling her she's all he wants, thus love is born. It's all pretty basic but not without charm.

I can't say I disliked the episode, as it certainly is a very cute romance tale, also there is some humor to be found in seeing the younger Gems. I just think a longer story would've been more impactful, as well as memorable, but for what it is, I guess it is cute enough for some fans. I'm assuming there's some more episodes tackling the relationship between Greg and Rose, if there are, I think it might be best to watch them all together.