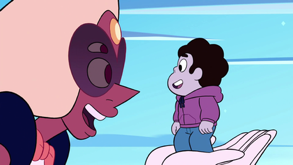 I'm not the only one reminded of the Ocarina of Time Great Fairies after Sardonyx laughs right?

No lie, this episode caught me off guard. What starts as an innocent episode, ends up getting much deeper, depressing, it's definitely a good thing for this show. Last time, I said that this show might tackle some darker metaphors, or themes honestly, this episode certainly does that. View this as a metaphor for drug addiction, sex addiction, consent, etc. and it's definitely something that will stick with you for long. In fact, even children who might not get those concepts just yet will get plenty here, as the team is severely broken by the end, yep it's a story arc that I hope isn't resolved by the time the next episode starts (and going by the ending, it will not).

I'm getting ahead of myself though, let's dig into the episode. So at the start, we're introduced to Steven and Amethyst watching "The Crying Breakfast Friends", which still, hilariously, confuses the Crystal Gems (minus Steven), when a message from Peridot appears on TV. The Gems, realizing where she might be, use Lion to get to the site we first saw in the episode with Nicki Minaj, I mean Sugalite. Garnet, fearing a repeat of last time, decides to fuse with Pearl, introducing Sardonyx to us, a cheerful fusion that carefully destroys the re-activated tower. The Gems celebrate their victory, until the next day that is, turns out the tower has once again gone up, resulting in Sardonyx to come back, as Amethyst sings a sad song about missing fusion with Garnet. Steven, wanting to cheer Amethyst up, decides to get her to catch Peridot, assuming she fixes the tower again.

In a surprising (but not really) twist, Pearl is the one fixing the tower. Steven and Amethyst are shocked, but try to reason with the notion, believing Pearl must have another reason, until, inevitably, she gets everyone to leave again the next day. Just as Sardonyx is about to be fused again, Amethyst reveals the truth to Garnet, with Steven back her up. It's an emotional wreck that follows, as Garnet screams at Pearl, scolding her for wasting time, while also scolding Amethyst who tries calming her. Nicki Minaj is left out, but Sugalite appears to completely wreck the tower, as we then cut to the next day, with Pearl and Garnet no longer speaking, while Amethyst and Steven remark upon how life would be better as a cartoon show.

This is truly a downer episode, tackling a subject matter that's mature, but also presented in a way that will still affect kids, after all, what kid won't be sad at the ending? I'm curious to see what happens next, more so than usual for this show, I hope my curiosity is well placed, but for now, this is  definitely one of the highlights of the show so far.