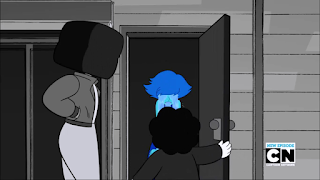 I heard this episode proves Steven is in a coma.
Joking aside, this was a pretty creepy episode to watch, I mean, just look at that still above. Continuing the search for Lapis and Jasper, who are fused and now known as Malachite, the Gems, and more specifically Steven, find themselves deprived of sleep. The set up allows for a cute plot about a slumber party commencing, only for the episode to slowly reveal it's not gonna be a laid back story.

This episode is largely comprised of dream segments, which reminds me of the episode with Rose's cassette, only it's so much better. We get our silly dreams, but then Lapis comes in, possibly sending Steven a message about her whereabouts, which is just nightmare fuel, especially for younger viewers I imagine. Side note, Pearl's Rose dream is hilariously awkward. Anyway, once Amethyst and Pearl learn of what Steven is dreaming about, they decide he should dream again to possibly get info out of her.

It's that final dream that really seems to set up the metaphor the show is going for between Lapis and Jasper, they're an abusive couple. No seriously, I mean maybe I'm wrong since I am behind, but this reeks of a metaphor for abuse, with Lapis trying to shut out help, while Jasper is forcibly trying to control her. It's not the first kids show to tackle the idea, but it's certainly the first I've seen in a while, which is something I'm curious to see.

The episode closes on a joke as Garnet decides to join the three in sleeping, which is fun, though I certainly hope it's not long before we see this story pick up. Despite all the creepy imagery, this isn't the most horrifying episode, but it's up there, definitely an episode you'll want to see.