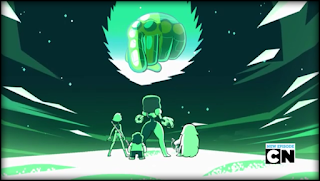 Peridot is here, and she's not alone.

There we go folks, we enter the penultimate episode of the season with the coming doom of the homeworld Gems. It's been a bumpy ride with some charm, but seeing the Gems fear for humanity makes this one feel even more tense than ever. The craziest thing about this episode though, is that this is only the first part of the epic threat, Peridot, the new Gem (Jasper) and Lapis (though against her will) prove the Gems right to feel fear.

As the episode begins, the Crystal Gems are preparing for an attack against what looks like a giant hand, but proves to be Peridot's ship. The Gems have all of Rose's cannons ready to attack the ship, but they prove to be ineffective, leading to Garnet ordering Steven to evacuate Beach City, which he does so (with the Mayor's help). The Gems stay behind however, ready to face Peridot as a successful evacuation goes on. As their on the road, Greg reveals to Steven that the Gems have fought before on Earth, in fact thousands of years ago, also revealing that the Gems are aliens, which isn't much of a surprise. Steven however is shocked, putting together all the pieces, from various episodes, which is a nice touch (I'd appreciate some stronger connections in the future though); anyway, Steven decides he must go back, using his shield like his mother would is important for the Gems to survive.

As our heroes prepare to fight whatever hides in the ship, Steven arrives with Lion (after calling Connie), ready to help. Pearl wants Steven out, but Garnet decides there's no time to get him away. The ship opens its door revealing Peridot, a new Gem named Jasper, who seems to be her muscle, and a kidnapped Lapis, forced to help them on their revenge quest. Jasper mocks the Crystal Gems, until she realizes Steven wields Rose's shield, leading her to wonder if Rose is still there, Garnet tries to fight back, but she is easily defeated, left as a pair of Gems, resulting in our heroes being kidnapped.

This episode was epic, just pure amazing thrills. There isn't much in the way of surprises, but that's okay, just seeing the Gems so powerless, without a single thing to easily stop the coming evil is enough to impress. This is an epic first part to the season finale, of course you should watch.