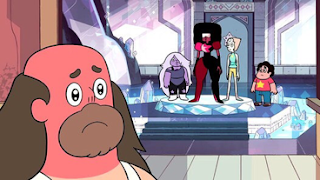 Did you miss these?

It was always going to be a tough act to follow after the stunning revelations of the last two episodes, so that this episode doesn't try is okay. It's a laid back episode and that's okay, there's some heart to this episode. I like that this episode acknowledges that, yes, Greg actually misses not having his son living with him, it's touching, after all, we know he's a good man.

Picking up after the events of the last episode, we find Pearl trying to fix Greg's van, while Greg is dealing with his broken leg. After he suggests to stay with Steven and the Gems, the Gems suggest Steven fix him with his healing saliva powers. Steven fails, causing him to freak out about whether or not his powers work. Everyone calms him, which leads to Greg staying over and a cute montage song comes along.

Eventually the Gems, along with Steven, must go on a dangerous mission, but Greg worries about himself, resulting in Garnet giving him a warp whistle (ha!) in case of an emergency. Obviously Greg abuses it to hang with Steven, which at first feels despicable, but just as we think we know everything, it's revealed Greg faked his continued pain, he was healed by Steven, but he wanted to hang out with him, since he misses living with him. Steven is pissed by this, but much like the viewer, he quickly realizes how sad this must be. Greg goes to the mission site, intending to fix his mistake, Steven's healing powers are not enough for the repair mission, but Greg's duct tape is. So we end the episode with Greg and Steven in joy, Greg hugs a disturbed Pearl, and everyone is happy.

Outside how annoying it was to see Steven, once again, being bothered about his powers not working, I can't deny the charm of this episode. It's not perfect, but it's an enjoyable cute time.