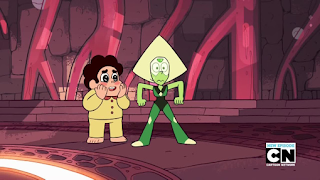 So Peridot is tiny then, okay.

Well, this episode arrived at a perfect time, no seriously, I was almost worried we'd have a long stretch of nothing going on. After the nearly season long story, Peridot has finally been captured by the Crystal Gems, which almost wraps a bow to the story, until it's revealed there's something she knows, something more sinister going on underneath the surface.

A lot goes on within this episode, but rather than just recap the plot, I'd rather just make observations this time, because the plot is fairly straightforward, but the content is interesting. One thing I especially found interesting, is seeing Garnet, being the most aggressive at the start. Remember, a few episodes ago, Garnet realized that Peridot was forcing fusions between Gems, so it's no surprise she'd be the most ready to pounce. Garnet is filled with so much rage, that she initially ignores Steven's mention of Peridot possibly having some information that could be vital.

Much like the episode with Peridot's first appearance, Steven seems to know something the Gems don't pick up on right away, unlike that episode, the Gems become more accepting in this episode of that knowledge. Once Steven makes his case, the Gems go along with it, so already we seee a sense of growth with them, they don't just see Steven as a kid anymore, but as a valued ally, which is a nice bit of growth. Of course, Peridot isn't giving up so easily, deciding to stay in their bathroom, which leads to great humor, both because we see her as a tiny villain now,but also because she lacks understanding. Steven, eventually bonds with her, once he manages to talk to her without threat, further showing his strength in the team, his optimism in the good of others.

It's that optimism that does get me curious over what will happen next, will Steven's optimism betray him, or will we see him continually succeed, I'd like to see a twist, but even without that, it is fascinating. Thanks to this episode, my interest has been renewed to see this through the end of the season, hopefully the story continues.