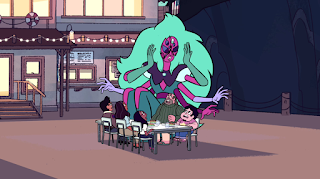 Well this was a charming date episode.
This is yet another winner for the show. It's a fun episode that feels reminiscent of Guess Who's Coming to Dinner, and The Graduate, which is always a plus. If there's any issue I have with this episode, is that Connie's decision to lie to her parents just feels odd, I get the reason, it just always feels odd that she goes to the extremes she does to her parents.

The episode begins with Connie and Steven hanging out, Connie feels nervous about Steven meeting her parents, especially when she reveals that she told them that Steven had two living parents, despite Rose being gone. In a humorous bit where her parents call, she gets Garnet to pretend to be Steven's mom, Garnet doesn't exactly make things worse, but it's funny to see her react under nervousness. Steven prepares for the dinner date, by convincing the Gems to all fuse to pretend to be his mother, yes Greg's reaction was hilarious.

The dinner goes about as well as you'd expect, but there's humor to be found in seeing Connie's parents not being as weirded out about a giant woman as they should be. The facade falls apart, leading to Connie deciding to run away with Steven on a bus. Of course the Gems catch them, but it's a cute scene. The episode closes out with everyone making up, which is rather sweet.

I really dug this episode, it's a cute plot that lives up to its charming premise. Highly recommended, especially if you ever had an awkward date with family.