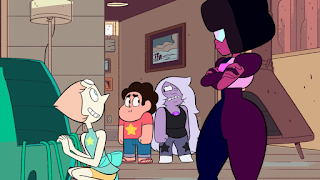 Will Pearl and Garnet ever be friends again?
This mini arc of the team divided has been a pretty good one overall. I wish it were better, by at least having some more solo time between Gems, but what we got was pretty well done. It all comes to an end here, though I do wish Pearl and Garnet had more time to talk by the end, I do feel like we have a satisfying conclusion.

At the start of the episode, we see the Crystal Gems confronting Peridot, whom they have discovered a way to track. Pearl seems to be the most eager to catch Peridot, largely to redeem herself, which ends up messing up everyone during the fight. Amethyst is feeling down, knowing no matter what Pearl does, she'll likely not be forgiven by Garnet, as Garnet, seems to keep being disappointed by Pearl. They detect Peridot again, with Pearl, once again rushing to catch her.

The four arrive on an old, abandoned Gem ship, only to find Peridot has trapped them. Pearl tries to catch her repeatedly, only to badly fail, as Garnet ends up falling with her in a trap. The two discuss the events that started this arc, with Pearl admitting she just wanted to belong to something special. Garnet explains how she feels, along with her brief separation earlier, meanwhile Steven and Amethyst listen, acknowledging some progress is being made. Eventually the walls in the trap start closing in, as Pearl and Garnet finally come to a mutual understanding and escape by fusing once more. As the four make their way to Peridot, Peridot manages to evade them, though not without struggle, closing our episode with the team, finally united once more.

As I said before, this was a satisfying conclusion. While I would've preferred more of the conversation, along with more of the inner struggles in previous episodes, this was a good way to raise some tension as we inch closer to the next major confrontation.