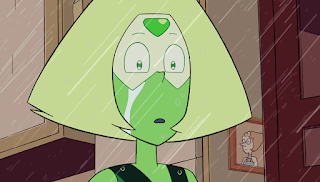 Peridot really is a kid isn't she?
Continuing from last episode, Peridot is still in the bathroom, refusing to aid the Crystal Gems. Also from last episode, Steven is still the only one she seems to have any trust for, allowing him to enter the bathroom as he pleases. This shows what's become pretty clear for the show, Steven's great strength being his optimism and love for befriending others. This episode continues that strength, by having Steven bond with Peridot, which admittedly was hinted at before.

There's a charming bit from the episode, where rain comes down, scaring Peridot into thinking the Cluster has been activated. Steven, knowing better, explains rain to her, almost like a child teaching another child, which convinces Peridot that must be the one to help her deal with the Cluster. The two new "friends" transport themselves to the Kindergarten, where Peridot begins to wonder what kind of Gem Steven, is, eventually realizing he's a hybrid.

Once inside the lab, where she first encountered Steven, she begins to explain the Cluster, as well as delving more into the mutant fusions. It turns out, the artificial fusions created are tests for something bigger, the Cluster, which will be a gigantic fusion of thousands of Gems, a monster larger than the Earth itself.

As the two look through the information, Peridot realizes she and Steven may be able to stop it together, but Steven, correctly points out that they'd need more than that. Some arguing goes on, as suddenly the mutant fusions arrive to attack, Steven protects Peridot as much as possible, until the Crystal Gems arrive to help. Our episode closing with Steven's friendship finally convincing Peridot to explain to the Gems what in fact is going on.

I'm liking how much the show is relying on kindness for the heroes to truly succeed. Steven may wield a shield, but his greatest ability in the show so far, is creating allies, which is interesting and charming. Peridot herself, however, proves to be an interesting ally to have, almost like a sibling to Steven, rather than a parent, like the other Gems have been so far. I hope this arc provides a strong end for this season, as so far, the show has really been improving over the last season.