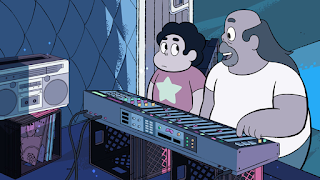 I know I've complained quite a bit, after all, it is frustrating to see development stop, but after some decent episodes, it's nice to see the show set the stage for the season finale. Granted, the episode waits till the end to set it all up, but that's okay, I'm not against any show telling a single story within an episode. I just prefer that a show set up its major story arc within those episodes, rather than create a bunch of throwaway episodes, while a big story is going on, it makes everything feel too slow. Anyway, this episode is exactly what I needed from this show after Steven's encounter with Peridot.

The episode begins with Steven and his dad recounting the events with Lapis. Greg creates a song where she is a malevolent spirit, while Steven corrects the song, by stating she was misunderstood, not evil. As soon as his take of the song is over, Steven, along with Greg, hear a strange, loud noise coming from the Gem's temple. They state it's a message coming through one of their items, but they can't understand it. Optimistic as always, Steven, decides to get his father to solve the issue, largely due to his skills in audio.

The Gems are reluctant, but give it a shot. Greg comes close to getting a voice, but his car breaks down before he even gets the chance to hear anything, leading to the Gems giving up on him. Greg sings a song about his failure, but Steven remains optimistic that he can do it. Suddenly, Steven realizes something, remembering an earlier quote of his father "video killed the audio star" (cute reference), Steven thinks the message is a video. Confronting the Gems for another shot, Greg acknowledges that they never seem to trust him all that much, which is something I hope the show explores more in the future. It turns out that Steven is right, as the message turns out to be a video of Lapis (nice foreshadowing), revealing she arrived to homeworld, but it's different, along with another Gem, threatening to attack Earth. Pearl fears what's coming, knowing Peridot is launching the attack, but Garnet instead thanks Greg for helping, ending our episode with Steven and Greg celebrating while the Gems stand silent.

Again, the episode doesn't focus much on setting the last episode up, at least not till the end. It works though, because we get a fine episode, that also doesn't feel like a distraction, which is what I hope this show does more of going forward. Really good time, here's hoping the next episode doesn't ignore this.