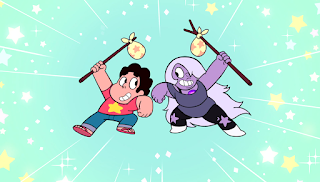 Well, that got emotional quick.

Finally, we pick up where we left off a few episodes ago, the result is an emotional episode that stands out. It's great, that after 40 episodes, we finally know why the Gems are on Earth, as well as why they fear other Gems. In any case, the heart of the episode is what makes this stand out, not how the episode advances the plot. We've known little about why Amethyst is so rebellious, here we learn her back story, as well as why she acts out, it's definitely the saddest thing we've seen in the show so far.

The episode begins with the Gems bringing all of Peridot's tiny bots, which is weird that they waited till now, but oh well. Steven questions why, which leads to a reveal of why the Crystal Gems are even on Earth, they protect from the Homeworld Gems who seek to abuse the Earth for their own needs. Steven connects the Gems to a novel he's reading about crime solving boys on the run, Pearl denies a connection, but Amethyst decides to indulge Steven by running away with him. They have their fun at first, but Steven soon decides he's done playing and wants to go home, Amethyst decides to keep going, wanting to reveal to Steven her birth place, "the Kindergarten".

It's a dark, gloomy, mountain Amethyst brings Steven to. We get a cute bit where Amethyst shows Steven her old playground, along with the hole in the mountain where she came from. As Steven notices there are more holes in the mountains, things get darker, Pearl confronts the two, leading to Amethyst fighting Pearl, while pushing Steven away. Amethyst admits to feeling like Pearl viewing her as a mistake, much like the other Gems that Homeworld created there. Pearl comforts her, reminding her that she's the one good thing to come from the horrible place they reside in. The episode ends with the two showing their care for one another.

This is an incredibly touching episode. Sad, relatable and a nice way to let our characters explore their own demons. I definitely recommend people watch this episode if you want to see how strong the show is when it is focused on personal struggles.