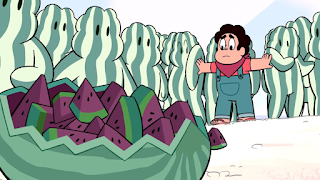 This episode was absolutely adorable, not as good as the last one, but I liked seeing all the melons in this. For the most part, this is a basic episode, Steven finds out he has a new power from his mom, things go wrong, he fixes it, but the interactions and of course the living watermelons make this a quick enjoyable sit through.

The episode begins with Steven and his dad, charmingly showing off their seed spitting skills, it's a cute scene that soon sets up the story. Somehow, Steven managed to make those seeds grow into watermelons that look like him overnight. Amazed and charmed by this, Steven sets up shop, he plans to give them all for free, but after a misunderstanding, he ends up selling each for five bucks.

After Onion tries to kidnap one of the melons, Steven learns that they are alive, resulting in a funny sequence where he refunds everyone and rescues his melons. After trying to rescue one from an autopsy by Ronaldo (Ha!), Steven learns the watermelons can be aggressive. He looks for the Gems to save the day, resulting in some more humorous sequences, including one where Amethyst is being buried. Steven tries, and fails to calm the melons, until one sacrifices itself for him, resulting I. The melons calming down, and being told to leave, which they accept.

It's definitely a cute episode, and while it does very much feel like a one off story, I wouldn't be surprised to see the melon Stevens again. I like the cute string of episodes this show has had right now, so all I can say is keep em coming.