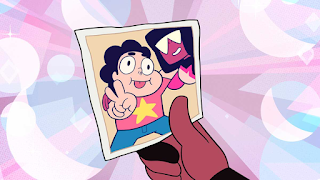 Well this is an episode.

I think this is one of my favorite episodes, if not my favorite, it is that charming. By its nature, this is one goofy episode. It's all a story created by Steven, meaning that it will lean on an innocent, childish approach to storytelling. The animation is noticeably choppier as a result, very reminiscent of older anime, which is a great touch to it. It's all those factors that really make this one stand out in a good way, this is just irresistible in how cute it all is.

Right from the start we know this will be a Garnet centered episode, as she's the only one returning from an adventure. Steven, sneaks around the house to surprise, upon doing so, he asks Garnet what she did, Garnet, in an almost motherly way, asks Steven what he thinks she did. The bulk of the episode takes place within Steven's imagination, which features what seems to be references to Usagi Yojimbo and Frog from Chrono Trigger, it's honestly cool nods. In this tale, Garnet partners up with the two, named Hoppy and Hopper respectively, journeying to be strong, protect the world and prove to the coolest person, Steven, that Garnet is cool. They eventually meet a human that seems to be what Steven views Ronaldo to be like, he's a goofball who lost his temple to an evil fox who has taken a deadly diamond.

The four journey to the temple, to confront the evil fox. Garnet loses the ensuing fight, leading to a pretty cool training sequence, with Garnet meditating and creating huge gauntlets. Garnet, stronger than ever, defeats the Fox, he reveals himself to be the guardian, with the Ronaldo of the tale actually being the evil thief. It's a pretty neat, yet obvious twist, with Garnet and her companions fighting the thief in an onion ring universe, complete with a funny gag about Garnet wearing weighted hair. The day is saved after the epic battle, thus ending the cute story, with Garnet acknowledging it's nothing like what happened.

If there's one thing I didn't like here, it was the ending, I get the choice to make a joke about how none of it was accurate, but I just think it would have been a little better if Garnet played along more as the episode did open with a really cute bond between the two. Still, this is one fun episode, so I can't recommend it enough.