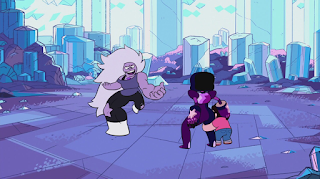 Kids, don't take steroids on just one arm and leg... I mean at all.
This is a harmless episode, not bad, in fact pretty entertaining, it's just kinda shallow in some respects. Sure, it's an episode that doesn't add to the ongoing story, but given that the last few episodes have had small references to the ongoing story, it honestly feels like we've been winding down, so that we could get an episode that doesn't reference Peridot, Jasper or Lapis. That's not to say I hope we a get a dozen episodes ignoring them, just that it's okay to get a breather before things go down.

There's really not much to actually cover about the plot, as it's another pretty basic episode, in terms of plotting. It's basically further explaining how Gems regenerate their forms, as Amethyst constantly "dies" and regenerates her form.

Side note, I love how the episode opens up, with Steven trying to get Pearl and Greg to take a quiz on his favorite cartoon, both deny doing so, while later acknowledging that his favorite show makes no sense.

Anyway, back to the plot, Garnet chases a corrupt Gem in Amethyst's room, which is why Amethyst keeps "dying". Trying to please Garnet, she regenerates with little thought, getting odd limbs and such. Garnet, consistently argues with Amethyst, as we see Amethyst at her most vulnerable since the Kindergarten episode. By the end we see her regenerate true to herself, and it's a cute lesson about accepting yourself for kids.

It's a fine episode, nothing special, but it gets the job done and it's a welcomed break from the main story, because it's not interrupting a major advancement in the plot, it's just taking a break from small developments. So, yes, season two is continuing it's improvements on season one, hooray.