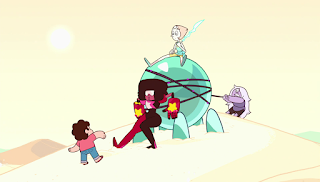 Well then, there's no denying I'm curious to see what happens next. Much like other episodes that seek to shake up what we know, this episode amps up the hype to what I'm assuming will be the first season finale. The only thing I'm kinda worried about here is that before we get there, we'll get some more pointless episodes.

Look, if this is your favorite show, I am not attacking you, I'll be watching all the episodes, so I may turn around, but so far I've noticed a very consistent issue I have with this show, it doesn't know how to keep tension up. I get it, it's supposed to feel more mellow in parts, but every time we get an episode that builds up the story, we have to take a break with some laidback episodes, yes plenty are good, some even help us understand the cast better, but those episodes slow the momentum down.

Back to this episode though, well, this is an episode I want to see continued, what happens next has to be interesting. Seeing Peridot sending a bunch of robots, while the Gems essentially go nuts fighting each and every one is tense. It's the ending where this all gets great, Steven's friendly approach has consistently helped the Gems, but here it becomes clear that just asking Peridot what she's doing has actually backfired. Sure the Gems know more, but now their defense of Earth has essentially been compromise, and I want to see this story continue.

Bottom line, yes this is a solid episode, but as much as I like the show so far, it has trouble in keeping me hooked. I hope this improves, but at the rate it's taking, yeah, it really needs to hurry. Still, where we are now works, so I understand if I'm alone on this.