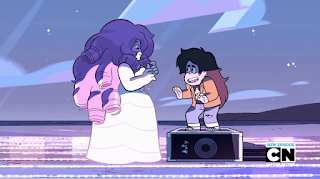 Back in time, when Greg looked like Steven, the second time.
This was an amazingly cute episode, much like last time it is nice to see Greg and Rose's past. Unfortunately, much like last time, this felt short for the story it tried telling. It's not bad, far from it, but I do think this episode would benefit if it were allowed to run for 20 minutes. I'm also a little bothered that this is interrupting the flow of the story. Don't get me wrong, this isn't unnecessary, after all we learn more about the history between Greg and the Gems, but after the last episode, you'd figure we'd continue with more on the search for Peridot. Still, I can't deny the charm this episode has.

We began with Steven, Connie and Greg having a good time, as Steven and Connie accidentally fuse. Greg is amazed, as well as shock that they can, leading into a story of the past, starting with a music video Greg made with the Crystal Gems. Pearl fuses with Rose, causing some intrigue for Greg as he sees the new being dance on stage. Sometime after, Pearl taunts Greg over his lack of fusion, though Greg remains certain that he can fuse, Garnet steps in to offer pointers for Greg.

Eventually, Greg decides to dance with Rose, putting her in the same mood. After a beautiful attempt, they fail to fuse, leaving Greg disappointed, while Rose explains it is not possible for the two to fuse. The two discuss their feelings, both feeling confuse, though eventually overjoyed as they share a sweet moment, with the other Gems being supportive from afar, except for Pearl who seems to look like she's lost. The episode closes with Greg and the kids  as the  trip down memory lane ends.

As I said before, this is a very cute episode, I just wish it was longer so it wouldn't feel as empty. I also wish this wouldn't interrupt the story,  it just makes everything feel less urgent. Still, go watch this episode if you're a longtime fan