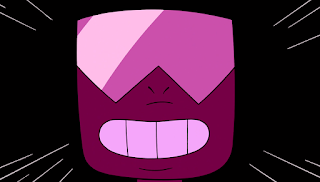 Garnet's smile is my favorite thing about the episode.

Anyway, as mentioned before, this is a cute episode, romantic even. It all starts with the Gems trying to teach Steven how to fuse, of course Steven can't. Pearl wonders whether or not he even can, after all, he's part human, but Garnet remains sure he can fuse. We soon see Steven talk about his issues with Connie, resulting in the two sharing a sweet moment dancing. With little surprise, the two fuse into a tall female form.the Gems react in different ways, most noticeably, Pearl seems disturbed by the two fusing, while Garnet is overjoyed and orders the fusion (known as Stevonnie) to have fun.

Stevonnie runs out to the world overjoyed. She gets donuts, she goes to a rave, she dances and she even breaks down, Stevonnie has a crazy night. We get questions as to how this works, how two feel as one, just things in general relating to fusion, most of it unanswered, but it's okay as the two realize they feel better apart than together.

The most fascinating thing for me about this episode, is seeing Garnet's reactions, especially while knowing what's eventually revealed about her. In any case this is a cute episode, and I know it's an especially big hit for the LGBT community, and as far as I'm concerned, they deserve all the positivity they can get.