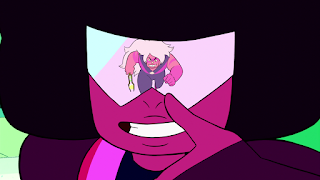 Alright fans, sing the song with me.

Upfront, yes, this is a strong way to finish the season, not great mind you, but it's solid and gives me interest for what's next. If there's any major flaw with this episode, it's that it is perhaps too short. I mean it's nice that it doesn't drag, but I almost feel like we needed a few more minutes of just seeing all the Gems in their cells, struggling with their imprisonment. Even another episode just focused on all the imprisoned Gems would've been interesting, but this is the episode we got and in fairness,it's still among the better episodes.

Right at the start, Steven finds himself imprisoned, but he can easily escape his cell, possibly due to being part human. Next to him, is a previously unseen Gem named Ruby, she's a bit impatient and demands finding the Gem who seems to be singing. Steven, helps Ruby get out, wanting to break free any Gems on the ship. Lapis refuses to go free, thinking they can't succeed and that being complacent might lead to their survival, Steven promises to come back for her. After that brief encounter, Steven finds the singing Gem, she's a blue, almost princess like Gem named Sapphire, Steven frees her, thus Ruby and Sapphire are reunited. The reunion leads to fusion, revealing the two to be Garnet, Steven is overjoyed and surprised to see her being a fusion.

The reunion is cut short as Jasper arrives to fight, Garnet gets Steven to leave and rescue Pearl and Amethyst. What follows is easily the show's best song up to this point, "Stronger than You", Garnet fights Jasper, as Steven rescues the other Crystal Gems, while taking down Peridot. It's a badass anthem for love, and the strength of it while the Crystal Gems take back control for the situation. As the ship crashes, Peridot escapes, while the Crystal Gems are safe in Steven's bubble, this brief moment of safety is cut short as Jasper desperately convinces Lapis to fuse with her (despite, hating fusions herself). Steven tries to warn Lapis, but Lapis fuses anyway, only to reveal her plan is to drag Jasper to the depths of the sea, effectively turning Jasper to her own prisoner. Our episode ends with the Crystal Gems in complete shock, while Connie returns Steven's call from the last episode.

As said before, this is a solid episode, I do feel it needed some extra meat to it to really make it great, but it's a stand out episode. Highly recommended, as well as a solid way to cap off the season.

Now if you'll excuse me, I'm taking a short break before I start season two, I hope to see you then.