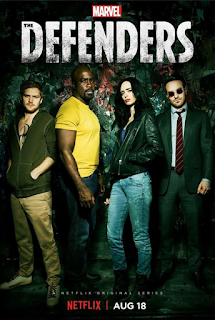 
I really enjoyed three of the shows preceding this, the fourth, is unfortunately the backbone of this series, meaning The Defenders has a lot less charm to it. Yes, I'm joining the chorus here, making Iron Fist, as well as the weakest parts of Daredevil season two, the main focus here was a mistake. It didn't have to be weak, there were ways to improve, but whoever is in charge clearly thought the show needed to keep telling the story they planned, without the need for audience feedback, resulting in an overall enjoyable, but lackluster show. At this point I'm really burnt out by this side of the MCU, it's hard to imagine keeping any kind of goodwill at this point. Still, The Defenders is a pretty decent show, largely because Daredevil, Luke Cage and Jessica Jones are good enough to keep things floating.

Surprisingly, the show's biggest weakness is anything involving the villains. So far, all the MCU Netflix shows have had strong villains, Wilson Fisk, Kilgrave, Cottonmouth, and, well okay, no one was interesting in Iron Fist, but three out of four was a good track record, how did this manage to rope in some lazy, boring villains? Sigourney Weaver plays our main villain for most of the show (spoilers are coming, sorry), much like Cottonmouth was for a good chunk of Luke Cage, but whereas Cottonmouth's death was shocking, and opened the door for another interesting (though not as interesting, if I'm honest)villain, here, Weaver's death opens the door for an uninteresting Elektra, who is basically the Winter Soldier in this series. That I cannot remember Weaver's name here should make it evident that she is boring, her character is basically the leader of the Hand, the evil ninja group, but as far as I can remember, Weaver never actually shows any real skills that gives any actual reason why she is leading.

The most interesting villain, (not a hard feat really) turns out to be Madame Gao, who has appeared as far back as Daredevil season 1, but with little to do, beyond just taking orders that is, she ends up feeling wasted. I was honestly hoping she'd be the one to kill Weaver, but instead of Gao, we get an Elektra who, doesn't support the Hand? It's hard to say by the end, but she kills the bad guy to take the role, which means we now have a lead villain with  barely a master plan. That master plan by the way, which drives the show, and has had supporting character Stick (we'll get to him) claiming a war was coming, ends up being excavating a dead dragon for immortal juice, no it's not as weird as it sounds, trust me it's a boring plan.

What makes the villains so boring here, is a lack of any real threat. Sure, the show states New York will eventually fall after the excavation, but we never actually see the looming threat, it just sounds like empty threats about possible damage occurring if the heroes fail. In the scenario we are presented, the Hand aren't even competent, which is an observation the leaders even suggest to Weaver's character as she apparently "sped things up". Assuming the Hand fully excavated the dead dragon, how long would it have even taken? It's apparently large enough to cover the city, would parts have fallen before others? Would the ones excavating even be able to get out by that point? It just all sounds so pointless, so much so, that I hope this is the end for the Hand.

Enough complaints on the villains, let's talk about some positives, the heroes... minus Iron Fist. Sorry, but the Danny Rand we've been given here just sucks, which is a shame because his comic counterpart is fun. Here, Iron Fist is pretty fun when he's with Luke Cage, or the other heroes, though mostly Luke, but outside of that, he felt like a Daredevil knockoff. It really shouldn't come as a surprise that I got pleasure from seeing him get knocked around for his stupid choices. The other heroes though, completely solid.

Seeing Matt Murdock trying to leave his Daredevil life is interesting, even more when we see him trying to call out Stick for the mess he keeps trying to involve him in. He really can't escape it, leading to some pretty cool action scenes that feel lifted from his show. Obviously he brings Karen and Foggy to the mix, and they're allowed some good scenes, especially Foggy. Though it's Stick who continues to shine, even if he feels downplayed here, but he's as cruel as ever, leading to some tense moments to remind us how far he's willing to go for his war.

Jessica Jones hasn't changed much since we last saw her, unsurprisingly, she's the one who scores the best scenes of the show. We're sadly not given much scenes with her supporting characters as a result of the lack of growth she has. Trisha and Malcolm are fun no doubt, but there's very little for them to do. We don't even get much sequences of them meeting with the other supporting characters, which is odd as the show sets that up, but it never happens, beyond one bit with Karen and Trish, but that doesn't exactly land as you might hope. Still, Jessica's reactions, though at times hard to believe given that it's a world where aliens destroyed New York years ago, are incredibly relatable and some of the best laughs of the show.

Finally Luke Cage, he gave me hope we'd have a better villain early on, but alas, he failed to deliver, at least he was fun with everyone, though mostly Jessica unsurprisingly. We get Claire mostly through him, again, unsurprisingly, and she's always a joy to watch. Not as fun though, is Misty Knight. I get it, Misty is meant to be the by the books cop, who wants to help, but also wants everything done by way of the law, but she just comes off annoying every time she appears. Part of that, is that she doesn't really do much, beyond just say "the police can handle this" when we all know they can't because trope reasons. It honestly dampens the mood, rather than set up a complex ally.

If you're wondering about the action, it definitely works. It's fun to see all these characters fight, but I can't help but feel like there's a lack of flare to it. None of it really stands on it's own, there's nothing here that says the action could only exist in this show, unlike The Avengers, where the action felt unique, despite using characters who had their own movies. I can't say I was disappointed mind you, I just don't see the need for a new show to represent the action we've seen before.

In the end, this was a satisfying show, but only in the sense that it is entertaining enough to warrant a watch. As a show about other shows coming together though, this just didn't have the same flare as seeing movies come together, maybe it's a result of having seen that in the movies, but it just doesn't make me excited, it just makes me say, "that's a neat low-budget version of what I've seen before".

The Defenders succeeds on a cast consisting mostly talented people. Just seeing three leads we love is fun enough, but I wish it were better than a simple distraction, this show deserves to be better. Here's hoping to a better second season.