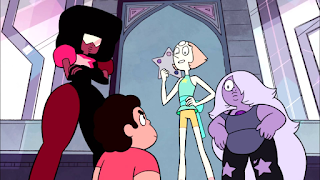 Am I the only one reminded of the fairies from Sleeping Beauty? Please tell me I'm not.

Well this was a very pleasant episode,  it's not important in moving the story forward, but I'd argue it's vital to show the growth between the main cast. It's not a funny episode, nor is there much of a "wow factor" to the action, but it's the emotion, especially within the resolution that made me adore this one. If it wasn't clear before, it's clear now, the Gems and Steven are family.

I've thought about it before, but the Gems are very much Steven's moms. I'm not sure if the show has, or ever will tackle that subject, but given that Garnet, Amethyst and Pearl are raising him, they are his parents. Of course Rose is his biological mother, while Greg does what he can to raise him, along with being his biological father, but the Crystal Gems are the ones always there for him. In that way, I am often reminded of the three fairies from Walt Disney's Sleeping Beauty, they don't understand humans all too well, but they care for a child that is not their own.

As the episode opens, we get a comedic bit involving a confused Pearl, playing a board game with Steven, the other Gems also don't seem to get the game all that much. Upon looking for a game, Steven finds a little totem that he was supposed to take, waaaaaay back in the first mission with the Gems (nice callback). Pearl, and eventually the rest, accidentally reveal that first mission was a test, worse yet, they accidentally reveal it was one that was pretty easy. Steven is frustrated, as he feels like he failed it badly, which has been pretty common for him. Steven decides he wants to be tested for real, the Gems accept and craft a room with three stages, each designed by the three. Steven takes the trial, he rushes through the first two, they're intense, but a breeze for him, then the third stage comes. It's revealed to us, as well as our hero, that the Gems actually made this a breeze, they only added a facade of intensity, leading to Steven being angered about their treatment of him as a kid.

Steven investigates the test, seeing just how easy it all easy. As Steven grows resentful of the Gems, we see the real heart of the episode. It turns out the Gems didn't make this easy because they don't believe in him, they made it easy because they know he's capable of extraordinary things, he just lacks the motivation after a few failures. They all break down, realizing they don't know how to raise Steven, leading to Steven deciding to confront them. We see our hero, walking depressed, not even trying to do the test, just pushing through, he goes up to the Gems, revealing, that he enjoyed the test. In a charming twist, we see Steven approve of the test, as well as the Gems just to cheer them up, it's an incredibly emotional way to end this episode, acknowledging some growth in how Steven feels for his caretakers.

I really enjoyed this episode, it reminded me a bit of the episode with Rose showing herself on tape, largely because this is Steven showing love for his parents, even if they didn't do exactly what he wanted. I honestly think you should watch this, especially if you have raised, or are raising a child.