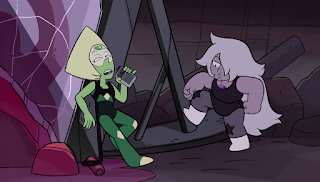 Well this is more like it.
This episode focuses on Peridot bonding with Amethyst, or at least trying to. This goes on as the progress for the drill is coming along smoothly, which makes this episode better than the last, in that it has more priority on the threat at hand. That's not to say it has no character moments, after all the episode is based upon the growing relationship between Peridot and Amethyst, this episode just knows to have the plot focus on preparing for the looming threat.

As we enter the episode, we hear Peridot, who seems to be recording a diary of sorts on a tape recorder Steven gave her, which Pearl, hilariously regrets his choice. Peridot openly acknowledges her annoyance with the Gems, especially Garnet, who is always fused, resulting in Peridot being tied to a leash like a dog. As Pearl nearly completes the drill, Peridot suggests they use parts from the old drills at the Kindergarten, Garnet allows it so long as Amethyst and Steven go along.

Up to this point, Amethyst has largely found Peridot's manner of speaking to be hilarious, which is no surprise, as Peridot seems to be the Drax of this show right now. All this humor comes to an end, when Peridot starts acknowledging Amethyst is a defective version of herself as Amethyst's are supposed to be big. Amethyst is insulted by this, despite Peridot intending it to be comical, resulting in Amethyst being mad at Peridot as the episode continues. Just as the drill nears completion, it's acidentally started, nearly hurting Amethyst, but Peridot decides to save her. We end our episode off with a cute scene of Peridot apologizing and acknowledging her own shortcomings through the use of her tape recorder.

I really liked this episode. It's character heavy, without ignoring the fact that they need to work on protecting the Earth. It also displays more characterization for Amethyst, who is quickly becoming the most well-rounded of the Gems, having more depth than initially thought. With just a few more episodes left in the season, one just has to wonder how epic will this season's finale be, for now, this is a good step forward.