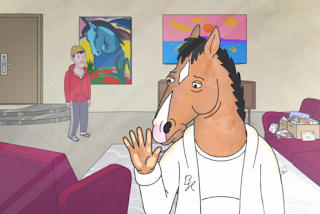 Have we not had a Todd episode before? huh.
Any episode following the last was always gonna feel like a step down, thankfully while this is that, it's also a damn good episode about our beloved couch slacker. Todd, up to this point, has always been shown to be a willing helper to just about anyone, so it's nice to see an episode all about him, yet not.

Given Todd's role in things, you automatically realize that the plot belongs to everyone else, with Todd supporting them. This, basically would be a normal episode for the show (so to speak), but the focus on Todd all throughout, make this a somewhat special episode. With Mr.Peanutbutter's campaign from his point of view, to seeing him confront BoJack after the last season, we do get a funny episode out of this, that allows him to grow as a character.

Along the way, Todd ends up meeting Hollyhock (I'll leave her full name for you to see) who claims to be BoJack's daughter, leading to one of my favorite observations from Todd, his acknowledgement that a DNA test might not be needed.While he tries to help her out, Princess Caroline gets Todd to be a boyfriend to an up and coming celebrity named Courtney Portnoy (the puns here are fun), all while accidentally getting Mr.Peanutbutter to be a fracking candidate. The progression of jokes here, including Todd trying to distract Diane from the news by pretending to be Channing Tatum (BoJack's most helpful unseen friend it seems), are some of the show's stronger material so far, even if the episode isn't even one of the best in the season (trust me, things go up from here). There's an attempt to convince Hollyhock she's not related to BoJack, that seems to be an interesting way to villainize Todd for the season, but it doesn't last long, which admittedly disappoints me, because it'd be interesting to see Todd lie to keep someone safe from BoJack for once.

As mentioned before, this is not as strong as the previous episode, then again what is? Still as far as follow-ups to amazing episodes go, I've seen worse, so it's good to see BoJack produce a hilarious episode with some memorable moments.