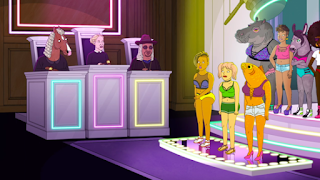 Sir Mix-A-Lot does not lie, that is what he is known for.
This was a fun episode, I, much like Sir Mix-A-Lot, cannot lie about that, however I can't deny it's also among the weaker episodes of the season. It's not that this episode is bad, I mean this is BoJack Horseman that we're talking about, I'll be genuinely surprised when a bad episode comes, it's just, much like other weak episodes, not very memorable.

BoJack is appearing on Felicity Huffman's show, which he agreed to a few episodes back, which in a hilarious turn of events, is a show about judging women... and their booties. This would be funny enough for the episode's plot, but it's hardly touched upon, which admittedly left me disappointed because I had hoped for more Mix-A-Lot jokes. Instead, the episode focuses on Hollyhock's new relationship with an intern at Felicity Huffman's Booty Academy (the title of the show, no lie), leading to a predictably jealous BoJack, which is cute, but does feel a bit too familiar compared to other sitcoms.

Meanwhile, we get Todd, and a now free from campaigning Mr.Peanutbutter, setting up a new business involving clown doctors. It's cute, but set up for later episodes honestly.

Finally, we get Princess Carolyn visiting her future in-laws with Ralph. This part of the episode is cute, showing more of the positive relationship between the two characters, culminating in the most awkward feast, which involves a story celebrating how stupid cats are... yeaaaaah, how fun.

BoJack's concerns about the intern are addressed, confirming what he believed to be a bad guy, it's a fine ending, but it's Hollyhock's conversation with BoJack that is particularly sad. This plays as we are informed that Jessica Biel has now joined the running for governor, which leaves me to say, god I love Jessica Biel in this show.