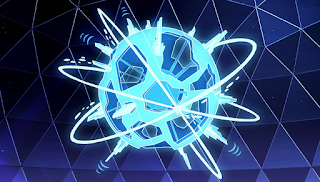 I honestly thought they we're going to reference The Sound of Music here.
As the show prepares for its second season finale, I can't help but feel it's a lot less epic than the last one. Don't get me wrong, so far this season has been an overall improvement over the last, so even if the season finale isn't as good, my overall feeling will still be more positive. I bring all this up, because the Cluster, as it turns out, feels less like a world ending threat, and more like an inconvenience as of right now. Maybe the next episode changes that, maybe it doesn't, but this episode makes the biggest threat be Peridot's stand in all of this, which seems to be that she still aligns herself with the bad guys, though, knowing what comes about later, that won't be the case for long.

The episode has a great song to highlight Peridot's continued growth, while the drill is finished, which further hints at her change in personality once the season is over. The whole sequence exists to speed the production up, but works, because we also see the other Gems began to enjoy Peridot's presence. Once that's out of the way, we realize that for the drill to work, it'll need to pinpoint the Cluster's location, resulting in the five (along with Lion) heading to an abandoned moon base.

Peridot gets to shine here, explaining to Steven, and by default the audience, some things about the Gems, like the matriarchs of Homeworld, along with the tech. Once Peridot finds the location, we quickly realize that she still lacks any care for the Earth, expressing her fascination with it being destroyed to turn it into another Gen colony. This angers the Crystal Gems, as well as disappoints Steven. Right before things get really bad, Steven convinces the Crystal Gems to leave, as he begins to grow suspicious once he notices Peridot has taken an item from the moonbase.

This is a pretty good episode, all things considered. It's not as good as last season's build up to the finale, but taken as the final steps into Peridot's turn to good, it's well done