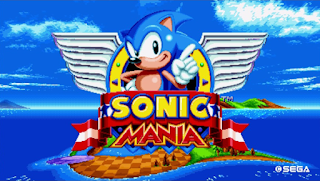 (Reviewed on the Switch version)


Let's face it, Sonic is not in his prime, his games are routinely mocked, his fanbase has become one of the most known creepy spaces online (resist the urge to look into Sonichu) and yet, he is still an icon. Has any character ever become known as Mario's rival like Sonic has? I mean, Sonic hasn't had a consistent quality in his games since the Genesis days, but people still consider him Mario's rival, that's impressive when you think about it, no character has left as much of an impact on gaming to take his spot. That'd be like if the comics fandom still considered Captain Marvel (Shazam) to be a rival to Superman to this day, despite having little to actually compete with Superman in modern comics. Sonic Mania, aims to be not only a monument to those days, but an example of what good can be done with the franchise moving forward.

Upfront, I am a Sonic fan, in the sense that I don't think all his games are shit, plus his cartoons have generally been okay. Sonic Heroes, Sonic Generations, Sonic 4 and even the handheld titles have been varying degrees of good, or at least not bad, but I acknowledge that's not a healthy spot to be in. See, the thing is, none of those games are great (Generations comes close), they're either too obsessed with trying to be like the old games, or trying too hard to be new and cool, sometimes both, but neither model is built on the idea of making Sonic great. Sonic Mania's goal, according to the marketing campaign, as well as the team it seems, was to make a game, that reminds you of why the franchise was great, which ends up creating Sonic's first great game in decades.

Yes, Sonic Mania is a monument, no different than the other games mentioned here, the difference is in the details. While Sonic Mania's look and approach is very much of the Genesis days, there's a very new feel to it. Yes, more than half the levels are borrowed from past games, but little changes all across, including enhanced boss battles, make it all feel like it's own thing, more than Sonic Generations ever did. For example, the Chemical Plant Zone returns, but playing through this didn't make me feel like I was playing through a Sonic 2 level, I felt like I was playing something new(okay admittedly, that bit we all dread with the water made me feel like I was playing 2, but that's it), sure I knew I wasn't playing something original, but it felt like it. I like seeing games that can make me feel like I'm playing something fresh, which has been missing from Sonic for years, previous twists always made me feel like I was playing a homage, this is the first one that felt like it was focused on being an original, great adventure, with no interest in being cool since perhaps Sonic and Knuckles. It's a monument, but the kind that inspires progress, not the kind that wants you to worship the past.

Admittedly, there are still flaws here, but they're few, so let's speed through them. The game's desire to be like the old games works, but it brings flaws, the life system, as well as the time limit are fairly stupid and unfair, sorry. Some levels are made for exploration, so why must I rush through and then get unfairly killed for taking ten minutes trying to get every secret out? It made sense in the past, here it's just an unfair reminder to speed through some beautiful level design, or risk losing a chance to beat the stage. Then the lives system becomes incredibly unfair, when you realize part of your lack in progress, is built on the game offering a few lives. So every death brings you a step closer to having to restart, which can be incredibly annoying when you have to go back to act one, because you didn't pick something up right away in act two. Again I get why it's there, but it should be dropped, no one really likes this system.

Still, the game marches forward. As mentioned before, the levels are great, homages of course, but they're made to feel unique, and seeing some of the animation on the cast being incredibly expressive is a joy to see. We get neat Sonic references (even to a certain spin-off) but as it turns out, that's an addition to a great game, not the reason it exists. Everyone has praised this, and I'll join the choir, Sonic Mania is a great game.