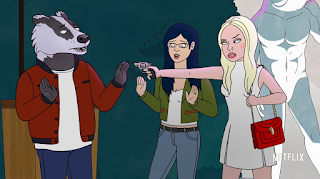 Well, that's one way to solve our gun problem.

This has one of the funniest moments I've seen all year on tv, that alone makes this an outstanding episode. Basically, this episode deals with mass shootings, as well as the empowerment of guns, with the show having one of the most clever ways to deal with the issue. I'm not going to go into the specifics, but seeing how the episode eventually "solves" our gun issue is one of the funniest, yet sad, truths I've seen on TV.

Let's dial it back though, the episode opens by addressing right away, that BoJack's lie to Hollyhock will not bear much to the season's story, it was just a way to keep her in the show for the next few episodes. So from there, what instead becomes their focus? Visiting BoJack's mom of course. Admittedly, after seeing her young life earlier in the season, we already feel sorry for her, knowing that she wasn't cruel at first. Things get sadder as we realize Beatrice is suffering from dimentia, she can't even remember BoJack, calling him Henrietta. Forced to spend time with her because of Hollyhock, BoJack tries to make the situation easier by watching "Horsin' Around". It's at that moment that BoJack realizes his mother seems to only remember him for that show. Deciding to put on a "live show", BoJack wants to tell his mother off when she realizes that her son is visiting her every week. This backfires, as instead the live show results in Beatrice getting upset, attacking another member of the retirement home, and being kicked out, forced to live with BoJack.

The B-plot, is where we get more topical, as mass shootings are making things hard for Courtney Portnoy's newest film, "Ms.Taken". Portnoy's reveal to Diane that she has a gun, leads to Diane owning a gun, leading to her piece on the subject becoming a hit with women, who start owning guns as well. This eventually gets crazy enough for men to start feeling scared about the matter, and I think you know where that leads into, it's hilarious to say the least.

I reiterate, the gun problem is solved in this episode, in what's probably the funniest scene I've seen on TV all year. It's that, along with all the terrific stuff involving BoJack's mother that makes this a stand out episode for the season.